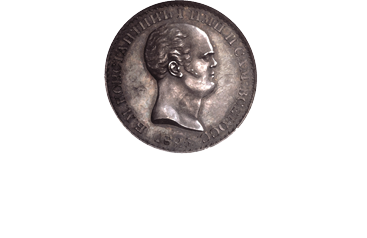 Dmitry Markov’s interest in coin collecting goes back to 1972. In 1985 he graduated from the History Department of the Kiev State University (Ukraine) and received his M.A. for the thesis - “Monetary Circulation in Ancient Russia (8th to 13th cent. A.D.)”. His broad interests in numismatics include Russia, Ancient Coinage especially those of the Northern Black Sea area, as well as Islamic Central Asia and Caucasus. He has published a number of research articles in these fields.

After coming to the U.S. in 1990, Dmitry Markov founded “Dmitry Markov Coins & Medals,” a well-known leading firm dealing with Russian Coins and Medals. Dmitry Markov’s continuing research on Russian, Ancient and Islamic coinage makes an invaluable addition to his very extensive auction catalogs. He has issued over 50 illustrated reference catalogues, as well as many other fixed price lists. Dmitry Markov Coins & Medals have been an elected member of the International Association of Professional Numismatists (IAPN) since 2000. Also a Life Member of the American Numismatic Association (ANA), American Numismatic Society (ANS), a Life Member of the Orders & Medals Society of America (OMSA), as well as many other trade and collectors associations.